Children’s Museum of Phoenix celebrated its grand opening June 14-15, 2008. Mayor Phil Gordon and the Museum’s Board Chairman Thomas Ambrose thanked the Museum’s supporters for making the vision a reality before a crowd of about 150 people. Phoenix Suns’ gorilla helped to cut the ribbon before the people streamed in to see the exhibits.

The Junior League of Phoenix Classroom hosted hundreds of kids creating crafts for their dads for Father’s Day. The Junior League of Phoenix, Incorporated (JLP) volunteers helped the children trace and cut colored flowers and string them on to pipe cleaners to form bouquets. JLP members also volunteered in the Museum’s Art Studio, helping kids to paint a house, tissue paper a dragon and make magic wands.

Housed in the historic Monroe school, 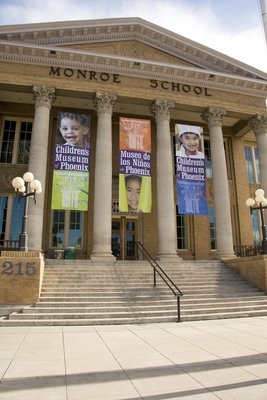 50,000 square feet are currently filled with exhibits and classrooms, with the remaining 20,000 square feet scheduled to open by the end of the year. Its three floors are filled with sensory, hands-on, educational fun. Until 2010, JLP Children’s Museum of Phoenix Committee provided early education programming in The Junior League of Phoenix Classroom. At present, our ROCKETS committees provide ongoing programming monthly.