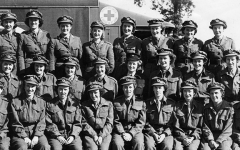 History is made in a lot of different ways, and often by people whose names we will never know.

This is a story about one Canadian woman—now almost 93—who participated in the making of history during the dark days of World War II as well as what is being done now, some 70 years later, to recognize the contributions she and thousands of other Canadian women made in the war effort.

The woman is Betty Shuter Oland, a long-time member of the Junior League of Halifax, Nova Scotia.

Betty’s story is eloquently told here—how she joined the Canadian Red Cross at 20…how she arrived in England two years later (a week after D-Day) to work as an ambulance driver with the British Red Cross…how she took cover in air raid shelters as the Blitz raged over London…and how she and her friends waded with other happy celebrants in the fountain in front of Buckingham Palace on VE Day.

What Betty Oland and so many other Canadian women did during the war, both at home and overseas, is now being recognized by the Halifax Women’s History Society in a monument planned for the Seaport Market on the Halifax waterfront.

Because the Halifax Women’s History Society realized that their city—a major embarkation point for troop ships and convoys setting out across the Atlantic—had no memorials to the women who provided so much support for the war effort, both in Halifax and across Canada. And in 2017, if the group’s fundraising plans are successful, Halifax will have its monument.

As for Betty Oland, after the war she simply moved on with her life—resigning from the Red Cross, marrying Donald Oland, a businessman who had lost a leg in the war, moving with him from her native Montreal to Halifax and remaining active in her community, including The Junior League. A quiet life—except for those war years.