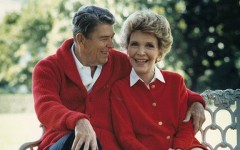 Nancy Reagan was many things in a long, productive and often glamorous life. Born in modest circumstances in New York City, she went on to become a Hollywood movie star in the 1940s and 1950s. Wife of a California governor and, later, of the 40th President of the United States, she traveled around the world, meeting popes and presidents. And through it all, she was known as her husband’s best friend and closest advisor.

She was also very much her own person. Mrs. Reagan used her own bout with breast cancer, in 1987, while still in the White House, as a chance to bring attention to the disease she shared with millions of other women. And as First Lady she spoke out vigorously against drug abuse and advocated strongly for programs to address it, particularly to help young people.

Mrs. Reagan’s life after leaving the White House in 1989 also says a lot about her character and determination. She devoted herself to the care of her ailing husband until his death from Alzheimer’s disease in 2004, but remained active in public life, both in support of the Ronald Reagan Presidential Library and in advocating for embryonic stem cell research. While she appeared rarely in public in her later years her voice could still be powerful and influential—during the 2012 Presidential election, for example, her endorsement was actively sought by a new generation of Republican politicians, earning her the new title, “First Lady of the GOP.”

Less known about Nancy Reagan, perhaps, was the fact that the former Junior League of Los Angeles member was one of five First Ladies who began their careers in public service as League members.