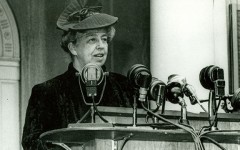 Doubtless the most famous friend of Mary Harriman, Eleanor Roosevelt died 53 years ago last month. Her early work with the Junior League of the City of New York helped the shy young woman find her voice, and the work she and other early League members did in the intense poverty of the settlement houses of the Lower East side was her introduction to the public service which became her life’s work.

Three times a first lady, the first U.S. delegate to the newly established United Nations, chair of JFK’s Commission on the Status of Women and a forceful advocate for the rights of workers, women, and children, she wrote in her (still very active) final years, “I could not, at any age, really be contented to take my place in a warm corner by the fireside and simply look on.”

Her future husband, Franklin Delano Roosevelt, reminisced that when he first began to court Eleanor, she surprised him with an invitation to visit the settlement house where she worked as a Junior League volunteer. She showed young Franklin a side of New York he had never seen before, and he credited Eleanor’s activism as the inspiration that awakened his social consciousness and led to their lifelong partnership and commitment to social change.

While previous first ladies gave up any social activism upon entering the White House, Eleanor set out to change that precedent. She continued with the active business and speaking agenda she had before becoming first lady, and with the full support of her husband, she became the “eyes and ears” of the New Deal. She is well-remembered for her work in social reform, tackling homelessness, civil rights, and women’s rights (among many other issues). In 1936 she began writing a syndicated column “My Day,” which appeared six days a week until her death, in which she voiced her humanitarian concerns.

And Eleanor never forgot The Junior League, about which she once said: “There is a most remarkable group of women, led by Mary Harriman who do important work. I want to be a part of that spirit.” She continued to champion the work of the Leagues and members took great pride in “one of their own” being in the White House. In 1938, she wrote an article for Reader’s Digest (then perhaps the most widely read magazine in the country) praising the Leagues. Titled “Lady Bountiful Rolls up Her Sleeves,” she said, “The Junior Leagues, which too many people think of only in connection with parties and the Social Register, have accomplished an almost impossible task. By making it fashionable, they have induced debutantes to give a certain number of hours every week to serious study and work.” She called the 31,000 young women in the Leagues “as conscientious a group of volunteer welfare workers as can be found anywhere,” and cited numerous League projects as examples of their outstanding work.

At the memorial service held after her death, prominent American politician and diplomat Adlai Stevenson remarked of Eleanor, “What other single human being has touched and transformed the existence of so many?” He further praised her by stating, “She would rather light a candle than curse the darkness, and her glow has warmed the world.”