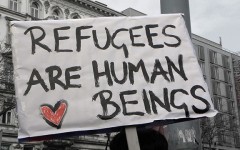 Even if you are not familiar with World Refugee Day, chances are you heard the political debate raging around this issue, both in the United States and Europe.

Politics aside, let’s take a look at what the Junior League of Cincinnati (JLC) is doing to help the refugees living in its community.

Looking for a new project in 2011, the JLC began extensively evaluating service gaps in the needs of women and children in Greater Cincinnati. They discovered a missing link between refugee families and organizations that provide support services; RefugeeConnect was born two years later.

Bringing service providers together in a community partner network is a critical part of this project. The Refugee Empowerment Initiative (REI) hosts quarterly meetings to allow providers to share needs and innovative solutions that better serve refugees living in Cincinnati. The meetings are hosted by the Brueggeman Center for Dialogue at Xavier University and involve more than 80 organizations.

Soccer: The international language
In addition to the virtual resource center, the JLC is committed to finding unique ways to help refugees integrate into the community, learn a new culture, and share their stories with other Cincinnati residents.

On June 4, the JLC sponsored the 3rd annual World Refugee Cup soccer tournament. Fifteen teams competed in a full-day, World Cup-style elimination tournament. This tournament is designed to reach beyond the players on the field. Approximately 20 REI partners participated in a resource fair to connect with the refugee population face-to-face, and the JLC’s Community & Outreach committee hosted a family fun zone. At the end of the tournament, RefugeeConnect awarded three local refugee students scholarships to college to continue their education beyond high school.

Next up: RefugeeConnect earned a grant from FUEL Cincinnati, a nonprofit accelerator that identifies innovative young professionals and works with local nonprofits to ignite unique projects. Working with the grant, RefugeeConnect will build a volunteer “funnel” to educate engaged community members – including the JLC – about the refugee experience and place them into meaningful volunteer opportunities that include ESOL tutoring, mentoring, employment preparedness, and navigation of social services.