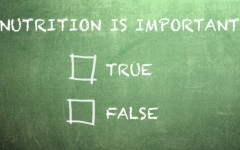 The answer seems obvious, right? But creating broad awareness of the true importance of nutrition as a public policy issue, and not just a matter of personal choice, is not so easy.

That’s something The Junior League has long championed. In fact, shortly after its founding in 1910, the Junior League of Brooklyn successfully petitioned the New York City Board of Education to provide free lunches in schools.

And that’s why National Nutrition Month, celebrated in March, is so important. The Academy of Nutrition and Dietetics, which launched the event in 1973, ties healthy nutrition (and appropriate physical activity) as a critical tool in reducing the risk of chronic disease and promoting overall health.

The statistics on the prevalence of poor nutrition are startling. The Food and Agricultural Organization of the United Nations reported that 795 million people globally were estimated to be chronically undernourished in 2012-2014. And in the U.S., Feeding America, the nationwide food bank network, found that 48.1 million Americans – including 15.3 million children – lived in food insecure households in 2014.

In addition to Feeding America, which currently counts over 200 food banks in its network and provides food and services to more than 46 million people each year, there are other outstanding national programs fighting food insecurity.

The Food Research & Action Center works with hundreds of national, state and local nonprofit organizations, public agencies, corporations and labor organizations in the U.S. to address hunger, food insecurity, and their root cause, poverty.

The Food Trust works throughout the U.S. and internationally to improve access to healthy, affordable food, through local partnerships to spread the success of the nonprofit’s original model in Philadelphia, where it was founded in 1992.

Many Junior Leagues are also involved in the fight in their own communities.

For example, the Junior League of Duluth is addressing food insecurity directly through its Let it Grow initiative, which is focused on fostering a food-secure community through a coalition of community partnerships focused on empowerment, enrichment and education.

The first initiative of the program is raising money to build a deep-winter greenhouse on an underutilized piece of land in West Duluth that will also house raised planting beds, a storage shed and a food co-op, along with kitchen classroom for use in educational programming.

Additionally, the Let It Grow greenhouse have a serious go-green component. Designed to grow vegetables throughout the long, cold Duluth winter using economically feasible and environmentally sound methods, plants will grow in hanging trays to maximize growing area and so they can be moved easily. The greenhouse will maintain heat through a subterranean heat storage system that draws heat from the top of the greenhouse during the day and directs it into a rock bed below the soil surface. Glazing on the south side will be oriented at a 60-degree slope to maximize solar gain during the coldest months of the year. The greenhouse, to be managed by Community Action Duluth, will allow for year-round production of food and offer additional transitional employment opportunities.

The Junior League of Chattanooga is focused on eliminating food deserts in its community (affecting an estimated 60,000 people in surrounding Hamilton County) through its Seeds of Change initiative, working in partnership with the Chattanooga Area Food Bank, the YMCA of Greater Chattanooga, and other members of the Hamilton County Food Coalition. Seeds of Change provides advocacy, educational outreach to encourage community gardens and access to fresh and healthy food, as well as trained volunteers for community outreach.

By the way, JLC was awarded grants in both 2013 and 2014 for Seeds of Change from Kashi – one of AJLI’s corporate sponsors – as part of its REAL Project, which aims to eliminate food deserts where rate of obesity and malnutrition are significantly above the national average.

The Junior League of DeKalb County has long been involved in nutrition. In 1937, three years after its founding as the Junior Service League of Decatur, members established a “milk fund” for needy children. That legacy continues today with JLD’s partnership with the Atlanta Community Food Bank (ACFB), which is much more than the name implies.

Each year, ACFB procures over 50 million pounds of food and groceries for distribution to more than 600 nonprofit partner agencies. In order to accomplish this, 1,000 volunteers each month (including JLD members) work with over 100 staff members and a large fleet of trucks to procure and distribute food and grocery items received from hundreds of donors including wholesalers, retailers, brokers and restaurants. JLD also volunteers with ACFB’s Product Rescue Center, where food drive and salvaged food items are brought to be inspected and packaged by volunteers for distribution to partners.

While the core of ACFB’s work is food distribution, it also offers educational programing to increase awareness about hunger and poverty, and offers benefits outreach counseling to provide referral services for assistance with food, healthcare, childcare and more. Additionally, ACFB provides assistance to more than 100 new and existing community gardens throughout metro Atlanta, providing products and tools, while dedicated JLD volunteers help prepare the soil, plant, weed and harvest.