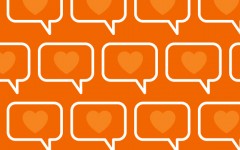 What does Valentine’s Day have to do with teen dating violence awareness?

This year, Valentine’s Day has also been designated Wear Orange Day, in which supporters of all ages wear orange – whether clothing, nail polish, ribbons, jewelry or shoes – to demonstrate their support of healthy dating relationships. (This is an offshoot of the “orange” movement, which uses the color orange as a universal symbol of the fight against violence against women and girls.)

And, if that’s not enough, Respect Week takes place during Valentine’s Day week (February 12-18) and provides a framework for young people to continue the fight against dating violence with awareness events and social media.

The sponsor of Wear Orange Day and Respect Week is loveisrespect.org. The nonprofit, which strives to empower youth to prevent and end dating abuse, provides these statistics to demonstrate the seriousness of the problem:

Junior Leagues are approaching the problem in a wide range of ways.

The Junior League of Ann Arbor/Parke-Davis Pharmaceutical Research Domestic & Dating Violence Prevention Endowment Fund tackles it directly by providing a sustainable resource for the education and prevention of dating and domestic violence that supports innovative, early intervention and prevention programs.

Strong Girls, Bright Futures, a project of the Junior League of Gwinnett and North Fulton Counties, seeks to make a difference in the lives of girls in the 5th through 8th grades by coaching them on how to make positive choices and think critically.

Positively More, a project of the Junior League of Greenwich, is designed to give pre-teen girls the tools to avoid compromising situations, lessen the consequences of potential conflicts and identify lessons learned by those challenges.

The Junior League of Little Rock’s Families and Community Together (FACT) initiative pairs JLLR mentors with pregnant and parenting female teens to encourage the participants to stay in school, delay future pregnancies and learn positive parenting skills. The League’s Girls Realizing Opportunity Within (GROW) is designed to help adolescent girls establish and improve their self-esteem and self-image in order to develop an inner confidence and to promote positive life choices.