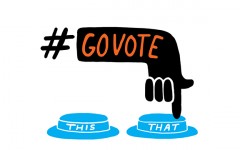 It’s no secret that most of the Americans who are eligible to vote don’t. Only two-thirds of Americans who are eligible to vote are actually registered to vote, according to the Statistic Brain Research Institute. And the nonpartisan, nonprofit FairVote reports that in recent elections, only about 60% of the voting-eligible population participates during presidential election years, dropping to about 40% during midterm elections.

That’s why many Junior Leagues are joining other nonprofits in a nonpartisan effort to make those voting-participation totals better. This year, over 40 Leagues and three State Public Affairs Committees across the country participated in National Voter Registration Day, with a varied range of activities including social media engagement, voter education and registration booths at their member meetings, candidate forums and community voter registration drives.

Among the League initiatives:

The Junior League of Douglas County hosted a candidate forum (2016 Citizens Summit Political Forum), providing Douglas County citizens the opportunity to hear directly from candidates of all political affiliations who are seeking elected office in the county, and allowing the candidates an opportunity to hear from and respond to the citizens they seek to represent.  This was their fifth year hosting such an event.

The Junior League of Phoenix created a great online campaign using AJLI’s hashtag “#JLVoterReg votes because,” where members posted about why voting is so important to them. Respondents’ answers were varied, including “because my grandfather died for this country” and “because my Junior League predecessors fought for the right to.”

The Junior League of St. Joseph registered close to 150 new voters in Buchanan County through four registration drives. 18 League members were sworn in as Deputy Registrars, many of whom are also teachers that have brought this important service to area high schools.

The Junior League of Wichita assisted the Health & Wellness Coalition of Wichita on their “Vote Like a Mother” campaign by handing out palm cards at the League’s annual Holiday Galleria shopping event. JWL also hosted a voter registration table at their October General Membership Meeting.

The Junior League of Des Moines participated in National Voter Registration Day by joining forces with the League of Women Voters on a voting drive at the VA Hospital.

The Junior League of California State Public Affairs Committee (CalSPAC) – In addition to its 17 member Leagues posting on their social networks and registering their members at their General Membership Meetings, CalSPAC Leagues also hosted a series of “Bubbles and Ballots” events to educate women throughout California about the issues during this year’s election.  In addition, the SPAC ran a “There Ought To Be A Law” campaign to seek out ideas from their members and the community to address holes or gaps in current state laws in any of the five focus areas that encompass all of the community projects of the Junior Leagues in California. The areas include Education, Family Support, Health, Human Trafficking and Violence Prevention.