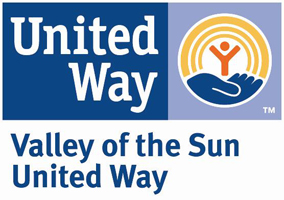 Valley of the Sun United Way is excited to stand side by side with the leaders of the Junior League of Phoenix to help end hunger in the classroom in Maricopa County!  Due to a generous $30,000 grant over three years from the Junior League of Phoenix to the Valley of the Sun United Way to its Ending Hunger in the Classroom Initiative, over 4,700 students in nine Valley schools will be able to start every school day with a healthy nutritious breakfast delivered right to the classroom.  Investments like this one to programs like Breakfast in the Classroom increase student participation rates by moving the most important meal of the day from the cafeteria to the classroom.

“School meals don’t help if students aren’t eating them.  Shifting the model to the classroom increases participation, decreases negative classroom behavior due to hunger pains, helps teachers focus on instruction, removes the stigma of poverty that comes from going to the cafeteria, and lets kids play with friends in the morning.  It’s a win-win-win!”  says Jayson Matthews of the Valley of the Sun United Way.

In addition, the Junior League of Phoenix’s partnership extends to their leaders volunteering to build and distribute Weekend Hunger Bags during the school year in order to help students not worry about food all week long.

Breakfast in the Classroom:

Need as of July 1, 2017: 1 in 4 children are food insecure in Arizona; 87,000 households are chronically food insecure (meaning they need emergency food assistance three out of four times in a month)

On average one school has 525 students; therefore we estimate that approximately 79,000 students do not have Breakfast in the Classroom.

Need as of July 1, 2017: 1 in 4 children are food insecure in Arizona; 87,000 households are chronically food insecure (meaning they need emergency food assistance three out of four times in a month)

As of July 1, 2017: VSUW provides 520 Weekend Hunger Backpacks to 12 schools in Maricopa County.  Each WHB feeds a household up to seven meals and includes child friendly food and pantry staples.  WHBs are delivered each Friday during the school year.

With a generous gift of $10,000 per year for three years, nine schools with approximately 4,725 students will be able to start Breakfast in the Classroom!