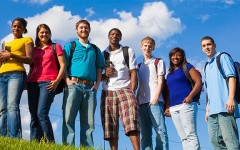 It took six years, but the tireless work of many, including the Junior League of St. Louis, led to the recent signing into law of Missouri House Bill 1583 regarding student safety and, more specifically, bullying.

According to a policy brief from the National Education Association, bullying and cyberbullying behavior is on the rise across the country, with 77 percent of public school students bullied mentally, verbally or physically, and one out of five students involved in doing some bullying. That’s a huge problem, and aside from creating a negative school environment, there can be far more tragic consequences when bullying leads to suicide.

JLSL began researching bullying issues in 2010 when members were introduced to Tina Meier, a Missouri mother who lost her daughter Megan to suicide in 2006 as a result of cyberbullying. Tina founded the Megan Meier Foundation in 2007 to “Promote awareness, education and positive change in response to issues surrounding bullying, cyberbullying and suicide.” To date, the foundation has reached over 172,000 students, parents and educators through school presentations in 193 communities and 32 states.

During the research phase of the project, the JLSL team realized that not only are there no national standards for schools to adopt on cyberbullying, laws at the state level laws typically direct individual school districts to develop their own procedures to deal with bullying, and policy differs in each district. JLSL’s fact-finding included attending seminars and meeting with victims’ families, which put a very personal face on the issue. They also looked at existing statutes across the country in order to determine how Missouri could institute new issues.

When first introduced, legislators insisted that the requirements of the proposed law were too much to ask of the school districts, but with ongoing testimony of JLSL members and other invested parties, the bill passed in the House of Representatives in April 2013. The next hurdle would be the Senate.

But pass it they did, and it included much of what was initially requested, including initiating a mandatory investigation of a bullying incident within one day of its occurrence, and a decision on the outcome within an additional 10 days. If the investigation finds the report genuine, action must be taken against the student bully, with severity of punishment ranging from counseling and notifying parents to possible suspension and expulsion. It also requires school personnel to attend annual youth suicide awareness and prevention education sessions, and specifies compulsory annual incident reports that will be reviewed by the department of elementary and secondary education. And when Missouri school districts are made aware of a possible offense off campus, they must notify law enforcement.

Diane Kerkhoff and Susan Schenberg, who have served as JLSL’s Legislative Issues Committee Chairs, both agree that the long effort was worth it. Since most bullying is by girls against other girls, notes Diane, it’s a natural fit with the work that many Leagues are doing with creating awareness of issues like teen self-esteem and aging out of foster care. Adds Susan, because the wording of the new law used specific language relating to youth suicide awareness and prevention it addresses the incredible pain that drove Megan Meier and many other victims of teen bullying to take their own lives.

The successful passage of HB1583 was very much a collaborative effort, and JLSL’s partners included the family of Megan Meier, bullied local teen Sydney Wilhelm and her family, representatives from Chad’s Coalition (Communities Healing Adolescent Depression and Suicide), Laura Logsdon, mother of a bullied suicide victim and founder of Be a Positive Light, and the Kirkwood and Ladue school districts. JLSL also consulted with Dr. Tim Jordan, a developmental and behavioral pediatrician, international speaker and author, who specializes in raising strong girls.